The great cities of Iran were surrounded by fences in the past and these cities were called “fenced cities”. Normally there were no constructions out of the fence for several reasons including the lack of safety. Harandy Garden Museum was one of the first gardens constructed outside the fences of Kerman city. It was built by one of the military officers of Kerman.

The area of Harandy Garden Museum is 25000. There is a two-story building in the center of the garden where its ground floor is a museum of traditional musical instruments and its first floor is an archeological museum.

The Museum of Archeology is one of the most significant sections of Harandy Garden Museum, which is divided into five sections.

In this hall, objects that belong to the Sassanid and Parthian eras are kept, which are dug out from the southeastern parts of Iran. Pottery, urns, and rhytons in the shape of animals such as horse, ram, and cow, are among the objects which are kept in this section of Harandy Garden Museum.

Jiroft is one of the ancient cities of Kerman province, which has been the winter capital during the Seljuk reign on Iran. The relics which are displayed in this hall, besides remnants discovered in the city of Jiroft, include objects belonging to the era after the Islamic conquest, especially, the Saffarid and Buyid dynasties.

One of the vastest plains of Iran is the Lut Desert, one of whose beautiful areas is Shahdad, which has historical value, in addition to visual beauty. The recent explorations show that there has existed a civilization in this area, which has had artisan people. Stone and metal tools belonging to that era are preserved in this section of Harandy Garden Museum.

Halil river is the longest river in the southeast of Iran. Archeologists have recently discovered ancient relics belonging to a civilization at the bank of this river, which go back to the third millennium B.C. The frills on these objects are plain and they are mostly grey.

This section was added to the museum about twenty years ago, and its purpose was to make the visitors familiar with the indigenous musical instruments of Iran. All sorts of instruments donated by Iranian musicians are kept in this section.

Harandy Garden Museum is surrounded by tourist attractions such as Moayedi Ice House. 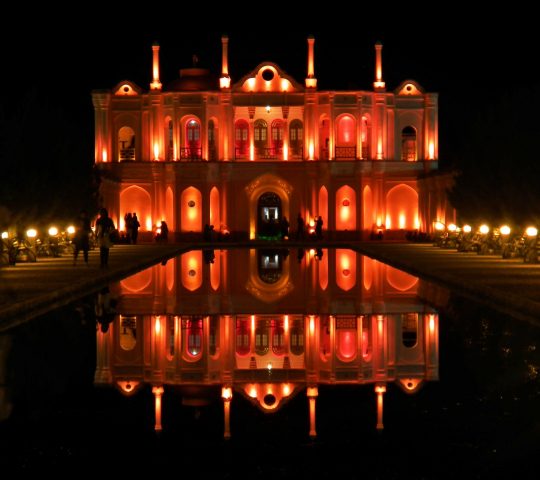