Pasargadae historical set has been the first capital and center of power in the Achaemenid period, and according to evidence, Cyrus, the founder of the Achaemenid dynasty, himself has had supervision on the construction of most of its monuments.

This set, which includes a vast area, contains various parts that will be discussed below.

The Tomb of Cyrus the Great

The most important part of Pasargadae is without a doubt the Tomb of Cyrus the Great, which is considered to be rather the most intact structure of Pasargadae. According to evidence collected from inscriptions and ancient documents, Cyrus built this monument while he was still alive as a tomb for himself. Structurally speaking, the Tomb of Cyrus the Great consists of seven steps and the sepulture room, which refers to the sanctity of the number ‘seven’. The sepulture room is plain and unornamented, and according to narrations, Cyrus’ body has been buried inside it wearing his golden cloack and armor.

Regarding the architecture of the structure, archaeologists believe that the Private Palace of Pasargadae might have been the residency of Cyrus the Great. Among the remarkable things about this place are the engravings on one of its walls, which depicts the scene of Cyrus passing by accompanied by his servant, and like Audience Palace, there is written in three languages, “I am Cyrus, the Achaemenid king.”

The structure of Mozaffari Caravan-Serai, which has been used first as a school and later on as an inn, was built in the time of one of the local rulers of Fars province, called the Al-e-Mozaffar dynasty, using part of Cyrus’ tomb.

Pasargadae garden, along with a few other Iranian gardens, is among the gardens that are recorded as World Heritage in UNESCO. Although nowadays, nothing is left of these gardens, in the past there have been two mansions on each side of them, which have been the rest place of the king as well as a spot to enjoy the scenery of the garden. The kennels of this garden were also among the architectural masterpieces at their own time; they would lead the waters into the garden after more than one kilometer, using the tilt of the ground. The kennels consisted of two parts: the water passages and the lavers. The lavers were used to slow down the water pace and pressure, and later on, they were also used for dividing the water.

It can be claimed that this palace is the first ceremonial palace of the Achaemenid dynasty, where the guests and ambassadors of other civilizations were provided with service and took residence in this palace. This palace had four gates and four verandas, of which the biggest veranda had forty-eight pillars. However, of all the pillars of this palace, only one has been preserved. Audience Palace has an area of more than two thousand square meters.

Concerning the Stone Tower’s usage, multiple theories exist, among which two are more probable and closer to reality: chapel or tomb of Cambodia, son of Cyrus. One of the similar structures, which is located outside of Pasargadae, is the Kaaba of Zarathustra in Naqsh-e Rostam.

Gateway Palace is one of the palaces of which little is remained, and all the theories around it have been shaped according to professional archaeology research. The only sculptor that is preserved in this palace is the sculptor of The Winged Man, which is the most important sculptor in Pasargadae Historical Set.

Sculptor of The Winged Man is the emblem of Cyrus the Great’s cerebration and politics which he used in uniting the civilizations under the Achaemenid flag. In this sculptor, a man with a beard is depicted, who is wearing a crown-like those of the Egyptian civilization, his cloack is similar to that of the Elamite, which exists in the sculptors of Elamite civilization, and human wings, which is among the features of the Assyrian civilization. Abyssinian ram, the illustration of two cobra snakes with their backs to each other, and three bouquets, which are covered at the bottom by three sun figures, are among other features of The Winged Man sculptor.

Tall-e Takht is one of the structures that has had a governmental usage and is in fact a part of Cyrus’ royal fortress, whose completion he could not see. Later on, this structure was completed by Darius the Great.

Regarding the fact that the Achaemenids were Mithraists, a holy area is improvised in Pasargadae, which has been the place of prayer for Cyrus the Great. Pasargadae Historical Set is on the list of UNESCO’s world heritage. 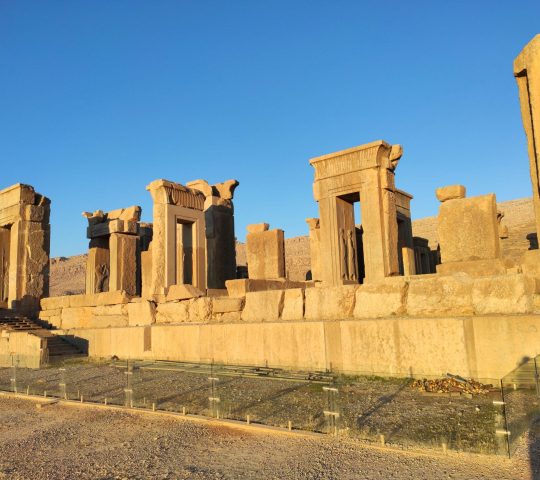 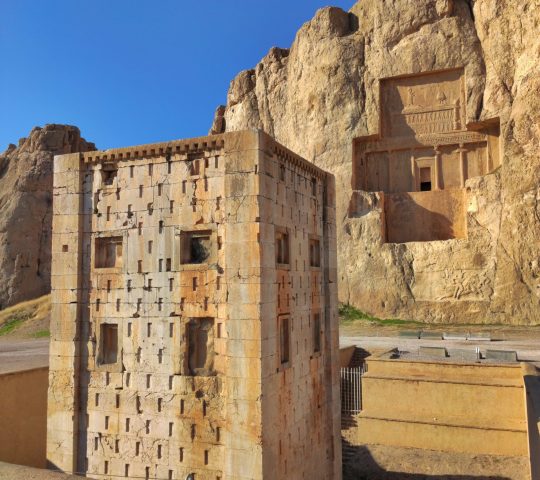