What is the meaning of Persian carpet symbols, signs, and motifs?

The patterns woven in the text and background of Persian carpets are symbolic and the pictorial language is elements beyond a decorative pattern. Because the Iranian weaver, in addition to being decorative symbolic patterns, thinks about the Iranian spirit hidden in these Persian carpet symbols and the beliefs of his ancestors. The Iranian weaver preserves and introduces the beliefs, ideals, and elements of his Iranian identity by weaving in the background and border of the carpet.

The component of national and human identity that is presented in three forms and as a symbol in Persian carpets are Plant Patterns, Animal Patterns, ancient and historical buildings patterns.

The concept of plants is a living symbol that is always renewed. In the concept of life and nature, plants, flowers, and trees are in the absolute sense of life, therefore, in terms of greenery and vitality, they have a sacred aspect and have a high status.

This tendency to be greener in life is also present in the art of Persian carpet weaving. Patterns of plants, trees, and garden elements are always the main elements woven in Persian carpets. Among these, the tree is of special importance because it is a symbol of life, growth, fertility, and frequent growth.

The tree symbol is one of the oldest designs that has been considered by humans and has been used in their works of art. This symbol, which in ancient civilizations was worshiped as a sacred tree or tree of life, has been considered in Persian carpet motifs since 3500 BC. The role of the tree and its types such as cypress, sycamore, oak, etc. has always been one of the main common designs in Persian carpets.

The Persian carpet symbol of the cypress tree

Cypress is one of the trees that has a high position among Iranian arts, especially Persian carpet weaving. This tree has deep roots in the beliefs of the ancient Iranians due to its evergreen vegetation. The cypress tree is a symbol of the joy of the soul and religious life. That is why the holy places are surrounded by cypress trees.

This tree was considered the tree of life during the Achaemenid and Sasanian eras and had a high religious status. An example of this tree can be seen in the body of the eastern stairs of Persepolis Apadana Palace during the Achaemenid period. The role of the cypress tree is the main and most widely used pattern among tree designs, which is common in Persian carpet weaving, especially brick carpets in Chaharmahal and Bakhtiari region.

The pattern of Paisley on Persian carpet

From the Safavid period and with the beginning of production and weaving of hand-woven Persian carpets, this pattern was woven with various shapes and forms in Iranian hand-woven fabrics.

Nowadays, the carpet with paisley background is one of the famous Persian carpets. This design, like the cypress, has a significant presence in Persian carpets and is a mirror of the visual identity of Iranians. Throughout the life of the art of carpet weaving, paisley is one of the prominent, constant, and extensive icons that is woven in the field of carpet weaving in most different regions of our country.

The symbolic concept of the Persian garden in Persian carpet

The mystical relationship of Iranians with water, trees, and flowers shows well that the Persian garden is a sacred environment because it is a relationship between the heavenly garden and the earthly garden.

Garden design has a very valuable place in Iranian art and so that weavers have always reflected and woven this design in their carpets. The historical background of garden design can be seen in the Baharestan carpet (Bahar Khosrow) in the Sasanian period. This carpet is woven in the design of the Promised Paradise.

The use of animal patterns in carpets has been common, at least since the Achaemenid period, as excavations of Scythian tombs in the Pazyryk Valley have uncovered a number of carpets (knotted carpets) attributed to the Achaemenids based on the designs used.

The concept of animal icons on Persian carpet

The pattern of Goat:

In Iranian mythological culture, the goat is a symbol of asking for rain and is repeated in most nomadic patterns.

The pattern of Crab:

The crab design repels evil. Our ancestors had a strange belief in constellations and considered crab to be one of the constellations.

The pattern of Snake:

In Iranian culture, the snake is a symbol of health and guardianship. In carpet designs, the snake is woven like S, which is known in the market as a cloud and wind map, but in fact, it is the symbol of the snake that has been tied to the carpets for many centuries and is considered a kind of guard.

The pattern of Fish:

The pattern of Turtle:

The turtle is a symbol of longevity and fertility. In carpets with a turtle pattern, the mother usually weaves it for her daughter so that she can live a long life and give birth to many children.

The pattern of Lion:

The lion is the national symbol of the Iranians and the most powerful force on earth. The carpet on which the lion was tied was given as a gift to the powerful people of the tribe.

The pattern of Dog:

The dog is a symbol of war and the defense of the tribe and family. Nomads sometimes weaved the wars that took place into carpets.

The pattern of Peacock:

Another Iranian bird that is considered a manifestation of Iranian culture and art is the peacock; A bird that is also known as a bird of paradise. “The role of the peacock often has religious meanings and has been used not only as a religious symbol in works of art of the Islamic period but also in ancient times and in Zoroastrianism as a sacred bird.

The pattern of Eagle:

This bird has always been known as a powerful bird that flies at its peak. This bird is a symbol of power and transcendent power on earth.

Durna is a symbol of asking for rain and seeking goodness and blessings.

The pattern of Crow:

The crow is a symbol of news.

The pattern of Rooster:

The rooster is considered a sacred bird in nomads because it sings at dawn and announces the end of night and darkness.

In Iranian buildings, historical monuments and buildings such as Persepolis, Taq Bostan, Soltanieh Dome and Naghsh Jahan Square (Imam) of Isfahan are buildings that introduce Iranian identity and Iranian architecture in the world. In terms of importance and association of identity, this building is the guest of Persian carpets. Carpets with a four-season design, including ancient buildings, heroes, and characters of the Achaemenid and Sasanian kings, are an example of handicrafts that have been able to express the national identity with a better image and symbol language along with the Iranian architectural element. 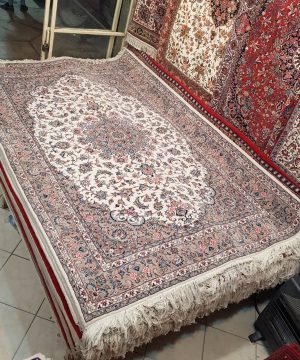 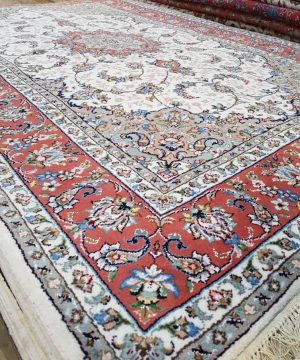 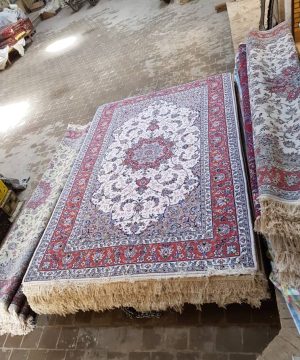 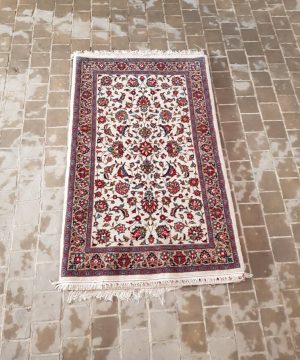 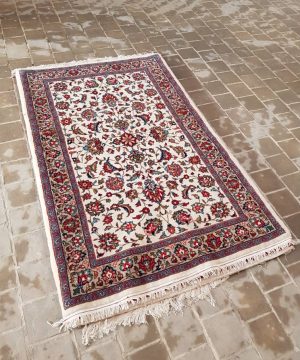 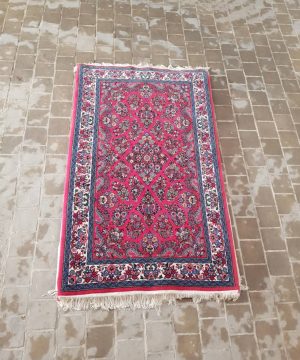 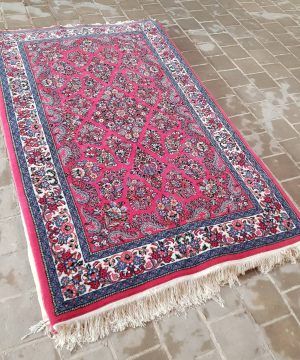 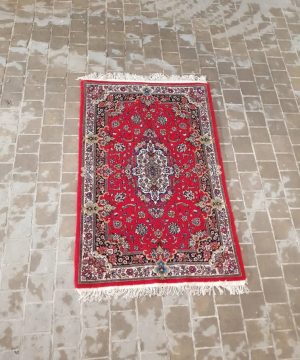 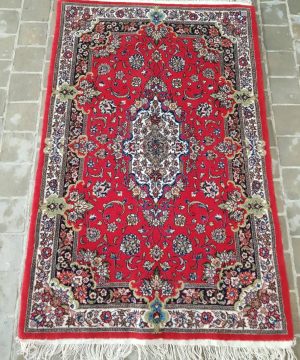 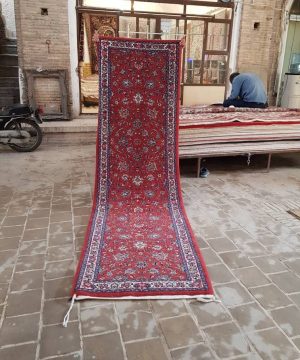 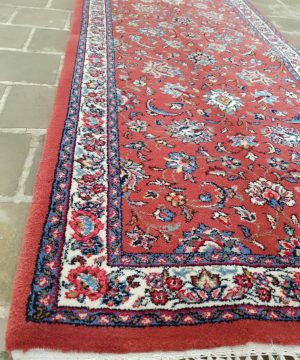 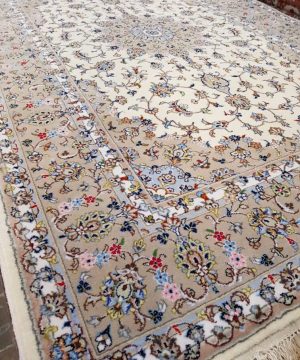 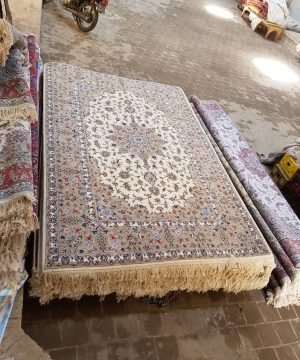 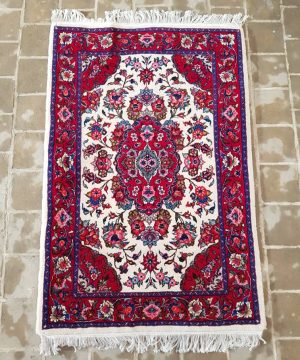 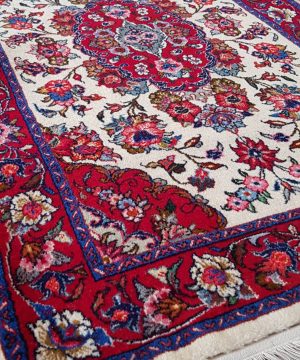