Iranian Souvenirs: What are the 10 most famous souvenirs to buy from Iran?

The Persian carpet is a symbol of art, genius, culture, and originality. Iranians have been pioneers in carpet weaving who over time with care, creativity, and taste, have brought this art to a level of perfection that can be considered as a representative of Iranian culture and art. The first documentary evidence of Iranian art in carpet weaving can be found in Chinese ancient texts related to the Sasanian period (224-641 AD). Persian rug designs are known all over the world and are used by many weavers from all over the world. These designs of these Iranian souvenirs are very pleasing due to their elegance and beauty and are a valuable criterion in many carpets.

The high quality of Iranian carpets compared to other carpets is quite clear and can be used to identify the authenticity of Iranian carpets. Iranian carpets have a lot of elegance in design and color, which is one of the beautiful elements in this handicraft. Iranian weavers have always used natural colors such as rosin, chamomile, grape leaves, pomegranate peel, walnut skin, sumac, saffron, beet, mulberry leaf, fig leaf, spruce, and indigo to provide higher quality colors to Iranian carpets overtime to give beautiful effects to Persian carpet. It should be noted that the use of natural colors causes Iranian carpets to have the slightest change in color over time and do not lose their quality when exposed to sunlight. You can choose one of the amazing patterns of Persian carpet as an Iranian Souvenir.

Ziloo – One of the oldest Iranian souvenirs

Ziloo is one of the Iranian Souvenirs that is woven in warm regions of Iran, especially Yazd and Meybod, and the oldest ziloo found in Iran is Ziloo, which is now located in the Meybod Grand Mosque, which was woven in 1406 AD.

Ziloo is very similar to mat in texture and texture, and like mat, it is one of its uses in mosques, mosques, and holy places. Experts speculate that Ziloo weaving is an evolution of the mat weaving method or that its weavers used the mat weaving method. However, Ziloo is one of the oldest hand-woven products, which is considered to be ancient before the rise of Islam.

Gabbeh – An Iranian rug dates back to early humans

Gabbeh is a type of rug and like carpet weaving, it has a lot of artistic value, so that today it has attracted countless fans all over the world to buy these Iranian Souvenirs. Some researchers believe that the reason for naming this rug as Gabbeh is its thickness and its use in protection against various factors such as coldness. It can be said that the history of the origin and production of Gabbeh dates back to the time of early humans, because they initially used the skins of various animals as their mats, and over time and with experience gained the ability to produce the first warp and weft mats from domestic animal wool.

One of the factors that have made Gabbehs can be found in different types of designs and patterns is the traditional and mental role-playing of its weavers, because there is no plan in the texture of this type of underlayment, and every weaver has everything in mind. Therefore, it can be boldly said that if you put millions of gabbehs together, it is still impossible to find two gabbehs with exactly the same specifications between them. This is another point of the artistic value of this product.

After being able to make a blanket out of animal skins, humans gradually began to think about using wool and skins for underlay. When man invented wool, since he was always providing comfort items, Gelim weaving was created so that humans would no longer sit on dry, cold ground. According to historical evidence, the history of this beautiful and valuable art dates back to 2500 BC. A kind of handmade underlay whose texture is without feathers is called Gelim; This souvenir of Iran is usually made of natural wool and is sometimes intertwined with a mixture of wool and goat hair. Gelim weaving is a female art and is mostly seen in rural and nomadic areas of Iran. The designs used in these types of weaves are generally geometric patterns that have different shapes, such as triangle, rhombus, hexagon, and rectangle. Of course, many original and traditional motifs adorn the face of Iranian Gelims, which sometimes take the form of animals and nature, and sometimes flowers and plants. The different designs used in these arts depend on the type and area in which they are woven.

Persian Miniature – Buy painting as one of the best iranian souvenirs

Persian Miniature is an art in which the artist depicts what he imagines on the screen and uses cultural teachings, cultural concepts to create a work of Iranian Islamic art. Persian Miniature is known as art derived from concepts such as the transcendence of the soul and reaching the world of meaning and immortality with a realistic attitude all over the world. The heyday of this art was formed with the emergence of figures such as Kamal al-Din Behzad and Reza Abbasi in the Safavid era, which indicates its golden age and the pride of every Iranian.

Although the art of painting in the ancient Iranian pictorial works dates back to Mani and even his past, after the arrival of Islam in Iran and the emergence of new intellectual and doctrinal foundations finds a new approach. We are witnessing the emergence of a new perspective on the art of Persian Miniature. This new thinking underlies the creation of valuable works of Iranian painters from the distant past to the present, and now the name and works of the Hossein Behzad and Master Mahmoud Farshchian, Iranian painters, are known in the world.

In a general definition, Khatam Kari is a formed and colorful polygons on the work surface based on creating a geometric or mosaic-like or triangular design, which together creates a beautiful and eye-catching effect by creating a formed design. Khatam Kari is one of the most original and beautiful branches of Iranian handicrafts, the construction of which, in addition to the taste and artistic look of the builder, requires time, accuracy, and patience.

Mina Kari – Reminiscent of the blue sky of Iran

Mina Kari is a work of art in which various designs, usually with a white pen, are engraved on copper, silver and gold. The background color of the motifs is usually blue, green and sometimes red, which if we look at the Mina Kari painted vessels from an artistic point of view, is reminiscent of the blue sky, which is why the name of this art is called Mina Kari. The Mina Kari art is more than 5000 years old.

Engraving is one of the old handicrafts of Iran, which belongs to the group of metalworking. Engraving is the art of decorating and carving various patterns on metal objects, especially copper, gold, silver, and brass with the help of a pen and a hammer blow.

Persian handmade cloth – One of the Beautiful Iranian souvenirs

In many societies, textiles have played a vital role in social, economic and religious life. Textiles can have both real and symbolic value, which is why they have long been considered by the aristocracy. They wore a lot of clothes to show their wealth. Termeh, Zari, Makhmal, Aba and Barak are the most famous Persian handmade cloths that you can buy as Iranian souvenirs.

Pottery is actually one of the oldest human handicrafts in the world. Among the most famous old pottery, jars and cups can be named. Before the advent of glass, most of the utensils used by humans were made of pottery. The best soil for pottery is clay, which is red due to its high iron content. Although pottery is a very old industry, with the passage of time and the expansion of urban life, this art has not only not disappeared but has evolved and adapted to the needs of modern life. Over time, human beings have painted beautiful patterns with different colors on these dishes and doubled its beauty. Today, in Iran and other countries of the world, this art continues its dynamic life. Each region has its own style and raw materials for making and decorating pottery and utensils, which, although there are very few differences with each other, it is possible to distinguish these Iranian souvenirs of each region from elsewhere. 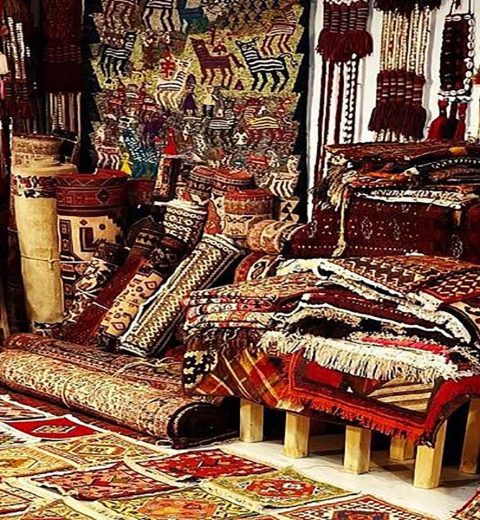